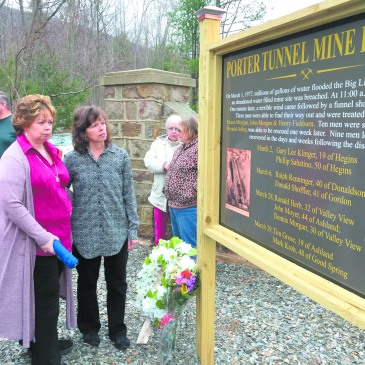 Rebecca Zemencik/Citizen-Standard Photo Cathy Leitzel and Beth Harman, daughters of Dennis Lee Morgan, take a moment before the sign to honor and memorialize the lives of nine miners who were killed in the Porter Tunnel Mine disaster, was dedicated Saturday, to remember and reflect on their dad. Dennis was 30-years-old when the disaster occurred March 1, 1977. He was not recovered from the mine until March 28.

PORTER TWP. – As she was watching the 2016 presidential candidates make their plea and speak of what they stood for, Beth Harman, of Valley View, was angered that some didn’t think anything about the coal industry. It was at that point that she knew now was the time to open old wounds and honor the memory of nine men who lost their lives in the Porter Tunnel mine disaster of 1977.
“When I heard that some of the candidates didn’t support the coal industry, it angered me,” said Harman. “Coal is our heritage and I have family members who gave their life while mining coal. My sons, Jeffrey and Nicholas never had the opportunity to meet their grandfather Morgan and I wanted them to know that coal was an important part of their heritage.”
“I knew we were coming up on the 40th anniversary and I felt that something should be done. I wasn’t emotionally ready to open up old wounds and I think that’s why nothing was done in the past. Who wants to remember something horrible that had happened? But I want future generations to remember what happened and to remember how dangerous coal mining was back then.”

END_OF_DOCUMENT_TOKEN_TO_BE_REPLACED

MILLERSBURG – The new representative for the firm that oversaw the Millersburg School District’s most recent renovation project got an earful from some board members about some items overlooked.
Brian Haines, an architect with Crabtree, Rohrbach and Associates, addressed the board at their Feb. 22 meeting, giving them an update on the Millersburg Middle School renovation and why it is not fully completed.
“We have been in discussion with several of the contractors about what needs to be done. Some of the items like seeding and landscape work cannot be done until the spring, but several of the prime contract items are finished,” Haines said.
The biggest critic of the plan, board member Donald Harris, questioned Haines on several items and noted that there were several problems that the architect planned to address with the board.
One such item is the lack of heating in the Johnson Memorial Library. Haines said the firm has analyzed the problem and added some lower temporary returns to the ceiling that helped.
“We are proposing to bring in new registers connecting the upper ducts with the lower registers and that should bring the heat down to the level of the library user,” Haines said.
CRA has also offered to pay for the changes, but there is also an issue in the high school’s shop area as well.
“The analysis we’ve done shows that the HVAC units are working, but using the existing duct work. The air is not coming out at a high enough velocity to reach the floor and heat the rooms,” Haines said.
At that point, board members were stunned to hear that such a plan to put in new units but keep the old duct work was done. Haines told the board he would research the matter further and have answers at the next meeting.
Harris asked Haines if it was possible to have the engineers that worked on the plan present as well to discuss the issue and Haines told them he would try to make it happen.
In other business:
— The board accepted the 2015-2016 audit for the district, prepared by the accounting firm of Boyer and Ritter, with no problems. Business manager also discussed the state Auditor General’s audit on the district’s performance from 2012 to 2015, saying that the district performed adequately in all areas with the exception of bus driver requirements.
According to the audit, the district’s transportation contract met all employment requirements except for requiring school bus drivers to complete a form which requires drivers to notify the employer if they are arrested for convicted of a criminal offense during their employment and to report the offense to the employers within 72 hours of the offense.
The district has prepared its response and corrected the action, and approved the response to be sent to the state auditor general.
— On a 6-2 vote, the board approved a memorandum of understanding between Dauphin County and the district to establish collaborative transportation procedures for foster care youth when the best interest determination indicates that the student should remain in the school of origin.’
Board members Mark Rothermel, Donald Harris, Morgan Wagner, J. Bruce Walter, Scott Roadcap and Bruce Kance voted yes on the measure, while board members Ryan Novinger and Brett White voted no. Member Margaret Lebo was absent from the meeting.
On a related vote, the board approved a transportation plan between the two entities. That passed on a 7-1 vote with Ryan Novinger casting the lone dissenting vote.
— The board unanimously voted to approve the Capital Area Intermediate Unit’s annual operating budget for 2017-2018, with Millersburg’s share being $6,556.27. Also approved was an amended Harrisburg Area Community College sponsorship agreement, lasting five years and dropping gradually from $53,269 thisyear, to $45,477 in the fifth year.
— In sports business conducted at the meeting, high school science teacher Aaron Wright was hired as the new high school football coach as a salary of $2,450, replacing Brad Hatter who resigned earlier. Wright was also approved as spring weight room supervisor and high school after school bus duty driver.
Superintendent Thomas Haupt asked the board for guidance on how to proceed as talks are underway for a co-op participation agreement for girls soccer between Millersburg and Halifax for the coming season, and the possibility for a five-year cooperative sports plan between the two schools.
Most of the board members agreed it sounded like a good plan but worried about which banner the students would compete under.
— Hired at this school board meeting were Olivia Miller as a high school English teacher, effective Feb. 27 and Lisa Schwenk as a full-time middle school learning support aide

District XI
BETHLEHEM – Nine area wrestlers from District XI earned the right to continue on their quest for a PIAA state wrestling championship, heading into this weekend’s Southeastern Regional tournament at Wilson High School, West Lawn.
Tri-Valley was the most successful out of the area teams, crowning two District XI champions in Sammy Hepler at 138 pounds and Dan Scheib at 285 pounds. Scheib was named the tournament’s outstanding wrestler as the Bulldogs finished third in the team standings, behind champion Saucon Valley and Wilson.
The Bulldogs will send five to the regional tournament. In addition to Scheib and Hepler, Bulldog wrestlers Cal Schoffstall (113), Dawson Schwalm (170) and Kolt Schaeffer (183) finished second in the tournament.
Tri-Valley was the only team to send wrestlers to the championship finals as the rest of the qualifiers made their way through the consolation brackets. Earning third place finishes in the District XI tournament were Dillon Kintzel and Carson Rittenbaugh of Pine Grove. Joining them is fellow Cardinal Zach Leffler, who finished fourth.
Also qualifying for regionals are Williams Valley’s Mikey Myers at 106 pounds and Ian Minnich at 285.
District III
Eight area wrestlers earned their spots in the PIAA Class AA Southeast Regional this weekend, joining the District XI qualifiers at Wilson High School, West Lawn.
Seven of those wrestlers will be representing Upper Dauphin, led by the school’s lone district champion, Bronson Garber, beating his opponent 5-0 in the 120-pound finals.
With the top seven earning their place in the regional tournament, Garber is joined by third-place finishers Jackson Kennerly and Donny Gelnett, fourth-place winners Ethan Paul and Zach Rupp, fifth place finisher Mason Wiest, and seventh-place finisher Evan Hoffman and Hayden McAllister.
Jakob Paul is Halifax’s lone representative at the regional tournament. Paul earned a second-place finish, losing in the finals to Bishop McDevitt’s Cole Nye by a 13-3 major decision.
District IV
Line Mountain finished in third place in the team standings at last weekend’s District IV Class AA wrestling Championship, held at Williamsport High School.
Wrestlers advancing for Line Mountain include two-time champion Garrett Kieffer (285), runnerups Matt Coller (106), and Caleb Shaffer (138); third-place finishers Cole Hauck (120), and Collin Klinger (132) and fifth-place finishers Brian Earlston (126) and Kenny Boyer (145).
Kieffer will be the only top-seeded wrestler for Line Mountain heading into the fast approaching PIAA Northeast Regional Class AA Tournament scheduled for Friday and Saturday back at Williamsport.
Three District Two wrestlers will join five wrestlers from District Four to form eight-man brackets in each of the 14 weight classes, ranging from 106 pounds to 285.
The top four wrestlers in each bracket will earn a trip to Hershey for state competition set for Thursday, March 9 through Saturday, March 11.
At 106 pounds, Coller (35-9) enters competition as a three-seed and will face Lackawanna Trail’s Cullen Ratchford (27-10), a six seed, in the quarterfinals.
Sixth-seeded Hauck, of Line Mountain, is set to meet No. 3 wrestler Fred Lewis (28-5), of Blue Ridge, in the opening round of 120-pound competition.
Earlston (28-7) will face top-seeded Brandon Judge (30-2), of Valley View.
Klinger (38-11) enters the 132-pound bracket in the fifth position and is scheduled to wrestle R.J. Driscoll (25-12) of Lake-Lehman in the quarterfinals.
Shaffer (29-17), Line Mountain’s 138-pounder, will face No. 5 Alec Talanca (16-6), of Berwick in his opening round.
An all-District IV quarterfinal matchup at 145 pounds will consist of top-seeded Southern Columbia wrestler Todd Lane (39-4) taking on No. 8 Kenny Boyer (27-12), of Line Mountain.
Line Mountain heavyweight Garrett Kieffer (34-5) will face No. 8 Sam Rishel (32-7), of Mifflinburg.